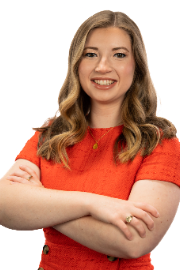 Charlotte began her career in conservative politics on Capitol Hill, first serving as a Staff Assistant and then a Legislative Correspondent & Press Assistant for Representative Bob Good, where she worked to advance individual liberties and prosperity for her home of Virginia's 5th Congressional District. Upon the conclusion of her time on the Hill, Charlotte curated resume recommendations for conservative Members of Congress as the Government Affairs Associate at Conservative Partnership Institute.

Charlotte obtained her bachelor's degree in political science with a minor in international studies from the College of Charleston in 2021. During her time on campus, she established a Network of enlightened Women (NeW) chapter, working to empower young women through conservative policies, professional development, and mentorship - her most beloved passion.

In 2019, she received the Chapter of the Year Award and the Enlightened Woman of the Year Award for her leadership in growing her NeW chapter and exposing bias on campus. During her involvement, she had the opportunity to be published in The Federalist and the Washington Examiner, as well as be featured on Fox & Friends. Beyond campus, Charlotte has experience in grassroots activism and has served in various fellowships with The Heritage Foundation.

Charlotte was raised in Farmville, Virginia, and currently resides on Capitol Hill.