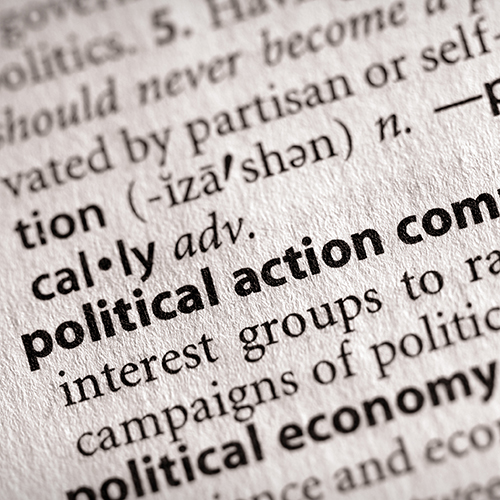 Before there was a Federal Election Commission, way back in 1943, the militantly liberal Congress of Industrial Organizations (CIO) formed the very first political action committee (PAC).

For the next thirty years, the labor union PACs enjoyed a virtual monopoly in the PAC field. Liberals in that area knew how wholesome PACs were: What a marvelous vehicle by which union members might pool their resources to support the candidates of their choice.

Of course, more than 90% of the union PAC money has always gone to the Democratic Party candidates, but liberals for thirty years could see the civic value of this outpouring of citizen participation.

But curiously, for the past fifteen years, liberals have gradually changed their minds about PACs. Now hardly a week goes by without some thundering liberal media attack on PAC money in politics.

Liberal print and broadcast journalists pour forth editorials and stories, supplemented by enough graphs and statistics to frighten almost anyone with a sociology Ph.D. or a press card. "Stop this cancer on the body politic," they scream. Our political system, they allege, is being taken over by big PACs, sinister forces with big money.

Central now to the liberal case against the 4,157 PACs of all types is the charge that PAC money is, in effect, a lobby strong enough to buy any politician. And liberals most often claim that the dangerous PAC powers today are the corporate and trade association PACs.

That is nonsense. The biggest, most powerful special interest in American politics is organized labor. The union bosses have an effective veto power over Democratic candidates in almost every region of the country. Virtually anywhere, a Democratic candidate is wasting his time running for Congress (or for dogcatcher) if the barons of organized labor are against him. He probably can't get nominated. But if he beats the odds and wins a Democratic nomination, he's almost surely doomed in the general election if the unions don't support him.

No single interest group has such a stranglehold on the Republican Party, surely not business corporations or trade associations. Unions are virtually a monolith; business is split up all over the lot.

At first glance, union oriented, Democratic Party liberals might be expected to be happy with the PAC system as it is. After all, Democrats consistently get more than half of all PAC contributions.

Well then, why the hue and cry against PACs from liberal Democrats?

The answer is they don't like real competition. The closer they could get to a monopoly of political action, the better they would like it.

They know they can't go back to the good old days when unions had a virtual monopoly on PACs.

But, if they can cripple or destroy all PAC participation in elections, the unions' literally secret political weapon would give them close to a monopoly once more. Happy days would be here again. Elections would revert to being contests of the Republican Party vs. the Democratic Party plus their union masters.

Here's why: PACs are now only the tip of the iceberg of union political power. The unions' greatest influence on elections is through "in-kind" goods and services for union supported candidates. These activities are not disclosed to the public. They are entirely outside the Federal reporting requirements, which apply to PACs but not to union-funded political activity such as voter registration drives, booming propaganda efforts, telephone phone banks, and most important, union staff time.

Expert labor columnist Victor Riesel estimated that in 1976 these "in-kind" union campaign activities cost more than $100 million. Today the secret total is surely several times larger, far, far more than all the candidate support by all types of PACs put together.

Right now, about half a million (500,000) staff are working for local, regional, state and national union organizations. That's more than 1,000 paid employees of unions per congressional district. Each year these union staffers, mostly paid with compulsory union dues, flood into the campaigns of the unions' hand-picked candidates, almost all liberal Democratic candidates.

It is no coincidence that virtually all the politicians agitating against PACs are liberals cozy with Big Labor. Limiting or abolishing PACs will have no effect on this massive "in-kind" campaign activity by labor unions. That, in my judgment, is why unions and the liberal politicians they have elected are willing to sacrifice their PACs. They want to regain their monopoly of private political activity.

PACs should be defended on free speech grounds, as the Federal courts have done repeatedly.

The liberal news media are free to print and broadcast unlimited endorsements and condemnations of candidates as they choose. It's downright unseemly for them to urge clamping down on political speech for anyone who doesn't own a media outlet.

By law, every contribution to a PAC of any kind must be entirely voluntary. And all PAC gifts to candidates must be promptly disclosed on the public record.

If Americans want to join together politically for any shared electoral purpose, to pool resources for or against any political cause, they should have the right to do so.

The amount of money contributed to PACs is growing but not excessive in a country of 240,000,000 people. We spend much more money each year on car washes or even on dog food.

In truth, PACs have broadened, not limited, public access to politics. They have greatly expanded the number of people who voluntarily contribute to election campaigns. That is surely healthy.