Dr. Francis H. Dong maintains an active consultancy in strategic planning, adult education, training and development, finance, international business, management, and public policy. He interacts and consults with chief executive officers and senior executives, trains and evaluates American diplomats, serves on boards and councils, and is often an invited event speaker. He has presented to audiences and conferences in Asia, Europe, Latin America, and North America.

He is an active Arbitrator for the Financial Industry Regulatory Authority (FINRA) and the District of Columbia Bar’s Attorney/Client Arbitration Board. Previously, he headed the military financial education project for the FINRA Investor Education Foundation and conducted 158 forums worldwide and at sea reaching more than 30,000 in the military community, garnered 34 commendatory letters from the United States Department of Defense, and received the FINRA Outstanding Achievement Award. Prior to that, he served as Executive Director of a United States Justice Department funded program on cyber-crime and intellectual property theft prevention and education. His business experience includes being Director of Strategic Learning Services for Arthur Andersen, LLP, in its business and government consulting practices. In that position he consulted with corporate and academic chief executives in examining and strategizing the future of their projected educational endeavors. Other engagements that he managed or to which he contributed served clients representing major multinational, foreign, and domestic companies in chemicals, communications, finance, high technology, and governmental agencies as well as academic institutions.

Dong’s academic career includes serving as a Dean or Director at several major universities after having completed a career as an officer in the United States Army. He taught finance, human resource development, marketing, and international business at University of Maryland University College; finance to corporate executives for the Pennsylvania State University; international business at George Mason University; and directed programs in technology, business, and engineering at the University of Virginia. He also taught finance, international business, and workforce diversity at Trinity College and economics at Charles County Community College. At DeVry University, he was Dean of Business, Computer Information Systems, and Information Technology Studies. Professor Dong is the recipient of several university teaching awards, including the Excellence in Teaching Award (given only once in a lifetime), two Teaching Recognition awards, and was honored by his peers with a singular special award, the Certificate of Recognition for Consistent Teaching Excellence.

As an author, Dong has published in several media including periodicals, books, video (broadcast nationally to corporate audiences), and the World Wide Web. His book, “Finance for the Nonfinancial Executive” has been used in university level finance courses. His other publications address business communications, management, international business, and eLearning.

Dr. Dong is Chairman of the Board of Directors of the Airmen Memorial Foundation, a United States Secretary of Commerce appointed member of the District Export Council (DEC) for Virginia/District of Columbia, and has been nationally recognized by the National Academy Foundation for his work in supporting education in finance. A Distinguished Toastmaster, he also was listed as an Outstanding Young Man of America and in Who’s Who Among Students in American Universities and Colleges. A ΦΚΦ Honor Society member, Dr. Dong holds a BA in history and philosophy from Fordham University, an MBA from Columbia University, an MS in Education from the University of Southern California, an MS in International Relations from Troy State University, a graduate certificate in Leadership in the New Millennium and a PhD from the Virginia Polytechnic Institute and State University (Virginia Tech). 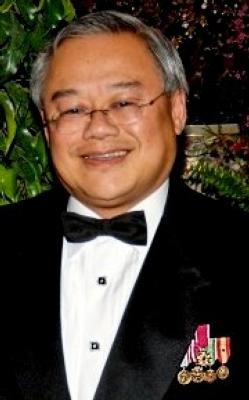