Learn to win at the Youth Leadership Workshop (YLW)!

The Youth Leadership Workshop is a custom training to teach you the skills you need to empower your membership.

LI has taken the best of our flagship training, The Youth Leadership School, and developed a 3-hour workshop to fit your group's specific needs.

At this YLW, you'll hear from our expert faculty about one of the following topics: 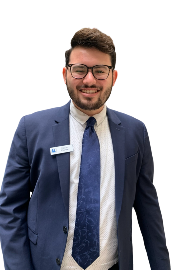 Celtin Clardie is the Leadership Institute's Deputy National Field Director. In this role he helps manage the field staff while taking on other various projects.

Celtin got his start in politics as a teenager. Throughout his time in high school Celtin traveled and worked on campaigns with the organization Generation Joshua, in addition to other civic involvement such as lobbying at various state capitols for school choice and assisting with several local and statewide elections.

In the Fall of 2019, Celtin served as the Leadership Institute's Field Representative for the state of Illinois where he was able to organize over 1,700 conservative/libertarian students across the state in hosting over 100 activism events, over 30 speakers, and creating 15 new student organizations on campus.

After his success as a Field Representative he was hired on full-time as a Regional Field Coordinator and later promoted to Deputy National Field Director where he serves today.

Throughout his time at the Leadership Institute Celtin has helped to start over 200 student organizations, identified nearly 10,000 conservative students, and taught at various trainings nationwide.